So, you thought finding a needle in a haystack was tough. How about finding a diamond engagement ring at the bottom of a cascading — and very cold — waterfall?

That was the challenge for Maine resident Evan Nadeau, whose fiancée, Erin Helfen, had lost her solitaire ring while swimming under the Buttermilk Falls in scenic central Maine. The couple had enjoyed a day of hiking and swimming, but it wasn't until later that Helfen realized her ring was missing. 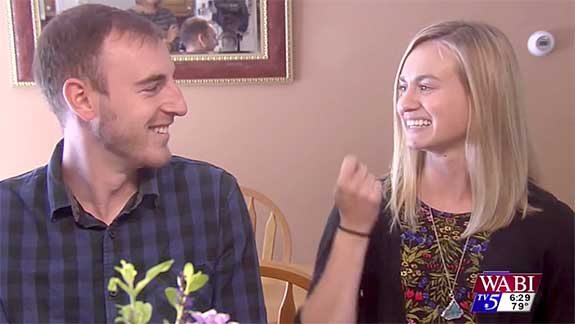 "It was awful," Helfen told local CBS affiliate WABI. "We had just come out of a swimming hole and [then] we had hiked about a quarter of a mile. I'm one of those people who kind of fidgets with her rings, so I was about to fidget with it when I looked down and it wasn't there. I was just like, 'Oh my God, oh my God.'"

After inspecting some selfies that they took during their trip, the couple could tell that the ring was on Helfen's finger when they got to the falls, but was missing after their swim. They were pretty sure the ring had found its final resting place at the bottom of the falls.

Helfen and Nadeau have a wedding planned for September 23, so the loss of their engagement ring was particularly heart wrenching. It hadn't been insured and the couple was not able to replace it.

But then, two weeks after the ring was lost, Nadeau was not ready to give up. He had formulated a new plan to get his fiancée's ring back. The future groom scooped up his diving gear and made a solo 70-mile drive back to the falls. Despite the frigid water, he was determined to spend hours submerged, scouring every nook and cranny of the rocky bottom while getting pummeled by the torrent. Nadeau said the water was so cold that his knees turned blue.

"After about the second hour in the water, after combing the area really well, I just saw the two prongs on her ring," Nadeau told WABI. "Her band had been wedged under a rock... The next thing you know I had the ring on my finger. I couldn't believe it. There was somebody looking out for me because there's no way I should have found that." 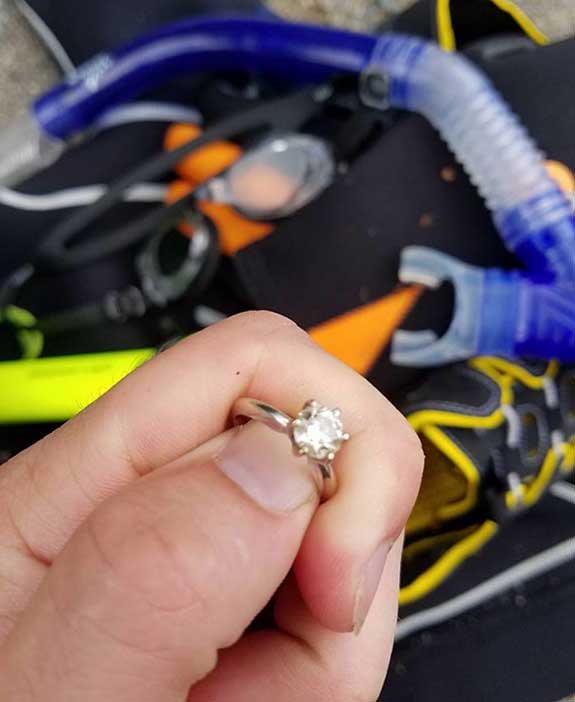 Instead of calling his fiancée with the good news, Nadeau kept his miraculous find a secret until he got back home.

Helfen greeted Nadeau as he pulled up in his truck. He told her that it was a hard, long day and that he got sick of being in the water. He was getting tired of it.

And then he said, "Well, what I don't get tired of is asking you to marry me."

Nadeau, who is a Registered Nurse at Eastern Maine Medical Center, pulled the ring out of his pocket and proposed again.

Helfen, who just earned her Master's degree in speech-language pathology at the University of Maine, believes that the ring symbolizes how the couple was "just meant to be together."

Nadeau couldn't be happier. "She got her sparkle back," he said.