When professional boxer Floyd Mayweather Jr. defeated UFC star Conor McGregor by TKO Saturday night in what was billed as "the fight of the century," the undefeated Mayweather earned a $100 million-plus payday and a Money Belt glistening with 4,260 gemstones. It is believed to be the most valuable sports trophy ever created. 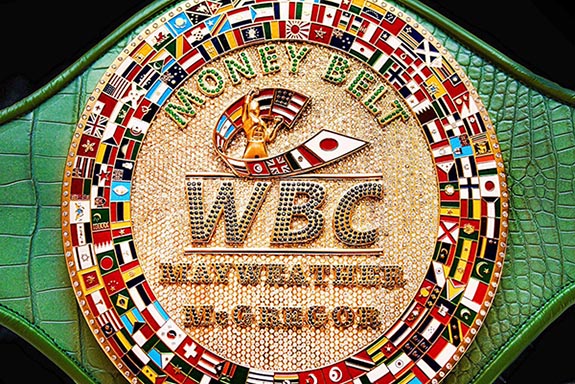 World Boxing Council (WBC) president Mauricio Sulaiman unveiled the belt on Wednesday during the final press conference leading up to the fight in Las Vegas. The belt, which is made from alligator leather imported from Italy, is studded with 3,360 diamonds, 600 sapphires and 300 emeralds set in 3.3 pounds of solid, 24-karat gold. It also features the names of the two combatants spelled out in gemstones.

Sulaiman refused to reveal how much the belt was worth, opting to describe it as a "priceless piece."

“It cost a fortune,” Sulaiman told MMA Fighting. “It cost many, many, many hours of work of many artisans. It is just a beautiful piece of work. It’s a lot of money. I don’t really have a figure. It’s a priceless piece for an historic event.”

When asked by a reporter where the belt would be housed during the time between the Wednesday press conference and the Saturday night event, Sulaiman said with a laugh, “If I told you, I would have to disappear you. It’s in a safe place. It’s in a secure vault.”

Interestingly, when Mayweather beat Manny Pacquiao two years ago, he also walked away with a blingy WBC belt featuring 3,017 emeralds set in 1.7 pounds of gold. That belt was said to be worth more than $1 million.

The match between Mayweather and McGregor was an unusual spectacle because it brought together the top names from professional boxing and mixed martial arts. McGregor made a strong showing in the opening rounds, but faded as the fight wore on. Mayweather's superior boxing skills prevailed, and the referee called a stop to the fight in the 10th round of the super-welterweight bout.

The victory brought Mayweather's unflawed record to 50-0, surpassing the 49-0 record amassed by Rocky Marciano during the 1940s and 1950s. The 40-year-old Mayweather announced that the McGregor fight would be his last. Mayweather was guaranteed a purse of $100 million for Saturday night's fight, but could end up earning $200 million or more based on international pay-per-view revenues.